David Falkirk (1969-?) is an author, writer, photographer, graphic designer, podcaster, recovering journalist and was a self-described geek before it was cool. Born and raised in Indiana and descended from strong Scottish stock, Falkirk enjoys telling stories in whatever form makes the most sense at the time. He has worked on everything from local newspapers to national magazines and international journals. Falkirk has found that writing for wildly different audiences is a great way to stretch himself as a writer and to challenge himself in communicating effectively.

He lives in Indiana with his wife, Kristen, their Lab, Callie, and their cat, Lando. Sadly, the dog and cat refuse to go on wacky adventures, no matter how much Falkirk encourages them to. Kristen, however, is usually down for such adventures. 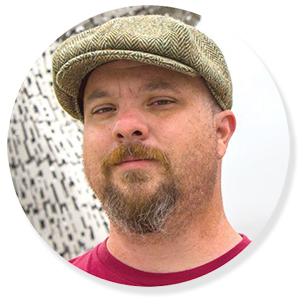 Aren’t you a little late to the game? – I’m reminded of the Chinese proverb, “The best time to plant a tree was 20 years ago; the second best time is now.” I spent years — decades, actually — in the creative wilderness knowing I had at least one book in me. The trick was finding out what it was about and then coming up with the mental fortitude to actually sit down to write it.

The thing is, I’ve known for a long while that I’ve wanted to write, and I’ve wanted to do it for a living in some way, shape or form. Most of my career path — as a reporter, editor and/or a copywriter — has reflected that. Becoming an author, that thing I always ultimately wanted to do, never seemed within reach, though. And, after running from it for what seems like forever, I finally took a hard, cold look in the mirror and mentally deconstructed what the problem was: What if I’m no good? What if I write something and it sucks? And so, I realized that my answer up until that point had been to avoid it. No attempt, no possibility of failure. For years, that was my unspoken mantra.

Of course, in the light of day, that reasoning is stupid. When it’s hiding in your subconscious, though, it makes all kinds of internal sense. After that realization, I knew I had to write what became known as “The Book” (all apologies to The Bible). The spirit was finally willing. All I had to do was get around the writer’s block.

How do you battle writer’s block? Often and with gusto. When I finally made the mental turn that the only thing standing in the way of my wanting to be an author was myself, I was ready to go.

Unfortunately, that’s when I found that I had an industrial case of writer’s block complicating the issue. I’d start with what seemed at first to be a promising idea, and then I’d watch it fall apart after the first few pages. Most of the time, the idea just didn’t have legs, or legs that I was capable of fleshing out in any meaningful way. If it didn’t capture my attention, there was no hope of sustaining it through a novel that anyone would want to read. It was like deciding one day to get off the couch and run a marathon. The aforementioned spirit might be willing, but the flesh will not drag itself across the finish line with only good intentions to back it up.

The trick to training for marathons, novels or any other endurance test, I finally decided, was to train for it. To beat writer’s block, you have to prime the writing pump and let your subconscious get to work (Stephen King’s “the boys in the basement” reference of where stories really come from, from his book On Writing, is the best explanation I’ve ever heard on the topic). One of the best training tools I found was the book Take Ten for Writers by Bonnie Neubauer. The idea was to use one of the book’s 1,000 writing prompts and write for 10 minutes — no more, no less — on that prompt. It gets the “what if it’s no good” bugaboo out of the way because it’s only 10 minutes; it’s not supposed to be good. After a few attempts, the words start to flow. The Joined World actually got its start from one of those prompts. Massively fleshed out, of course, but its genesis comes from a 10-minute writing exercise.

What do you enjoy most about writing? Enjoy least? I enjoy that moment when the air moves under the wings of whatever I’m writing and it just takes off and I’m left struggling to type fast enough to keep up. Every author, I’d imagine, has that sense of being present in the story and forgetting the “self,” where their vision is split between looking at the words they’re writing and the scene playing out in front of their mind’s eye. It’s that moment where they are actually hearing the characters speak in their own distinctive voices and the author has no idea where the words are coming from — or what’s coming next. It’s like dancing, where the music determines the steps and the dancer simply flows with it. Those moments aren’t meant to last, though, and it ends, for me, at least, when I become aware of it. The trance melts away until it’s just me and the keyboard again — my only hope is that I’ve danced long enough to build a platform for the next time.

What I enjoy least is when that moment just will not come. In those times, I’m banging away at the keyboard and the story will not come together — when my “self” gets in the way. I’ve learned, though, that the only way I can reach those transcendent moments is to park myself in front of the keyboard and start. Those moments only come with motion, and that motion is sitting down and committing word to paper, and then hoping for the best.

What’s your writing philosophy? There are writers who see themselves as an artist, and God bless ‘em. I just don’t share that viewpoint when it comes to my own work. I just want to tell stories, and if some kernel of the human condition can be decoded from it, so be it; it’s only there because I’m a human and that kind of thing will bleed through. I admire literary fiction writers; they have a much more disciplined mind than I do. I write what I’d like to read, and I can only hope my readers enjoy coming along for the ride.

What do you do when you’re not writing? Usually enjoying what other people have written. I love to read, and I love movies and television. I find that I go through peaks and valleys when it comes to writing. There are times when I write to the exclusion of the world (generally when I’ve given myself a deadline and that deadline is coming on like a freight train), and then there are times when I’m in more of an “input” than an “output” frame of mind. I try to keep an open mind, and just enjoy something if it captures my attention. In the immortal words of Dave Grohl,” I don’t believe in guilty pleasures. If you fucking like something, like it.”

On a completely different subject, my friends Ben Schneider and Paul Moeller host a podcast called “Tower of Technobabble.” The podcast has fallen into a bit of disrepair (Ben and his lovely wife had a lovely child, and Paul recorded and produced an amazing solo album); every now and again, we blow the cobwebs off and see if there’s anything left to say. For five years, though, we hit it hard and, at one point, even set a Guinness record for longest uninterrupted Webcast. The record didn’t last long, and the Guinness people were a bit of a nightmare to work with, but for one brief, shining moment, we held it, and there ain’t no one who can tell us differently.

What are your future plans? I’ve finished The Joined World trilogy (for my generation, Star Wars firmly cemented the idea of the trilogy structure in our psyche), and there will be some short stories sprinkled around the edges, as well. I’ve got some ground to cover and wasted years to make up, so it’s time to get to work.